I became a world judo champion in 1993. This is an excerpt taken from “Moderately Satisfied Our Sensei: Don Werner”, a book I co-authored with Pinewood club mate, and junior world champion and world bronze medallist, Karen Roberts – by Nik Fairbrother.

Two minutes into the contest…

It is the second minute of the final of the World Championships.

I am in the lead, a waza-ari up. But I’m on the back foot, making the first error a sportsperson often does under pressure, I have started to defend, protecting my score, unwilling to risk.

Chiyori Tateno, my opponent moves in.

Another attack. And another. She wobbles me. I stay on my feet, but only just. The world title is within my grasp, but I must hang on for another two minutes.

A couple of minutes.

That’s all. I am just two minutes away from winning the world judo title.

Two minutes away from becoming a world judo champion.

Becoming a judo world champion has been my dream for longer than I can remember.

I am now just two minutes away from finishing the journey, I began with Don Werner, fifteen years ago.

If there’s a situation that tests the mettle of any fighter, it’s going up a large score early on in an important match. Your opponent has nothing to lose and for the next few minutes, they are going to come at you hard, which is more than enough time to get thrown. The less they have to lose, the more dangerous they become. The choices come in fast, and it returns again to that same ultimatum: attack or defend? But my thought process is narrowing.

Psychologists will tell you, that my cognitive load is at full capacity, my working memory is saturated; there is no room left to process any new information, I am just surviving on instincts, and can no longer strategise.

The thought I might win the world title, followed by the consequential thought I might lose it, has shot my anxiety levels through the roof, this cognitive stress clogging up my orbitofrontal cortex impairing my ability to make decisions. Others call it choking. Whatever, my performance is rapidly deteriorating.

Tateno jerks my collar, she breaks up my balance, as she links up her combinations; kouchi to ouchi and then into a massive osoto-gari. The attack catches me, trapped, my weight over my heels.

I twist out but concede a score. Yuko to Tateno. My lead has just narrowed. It’s not looking good. Keep going like this, and there’s little doubt I’m going to throw away the world title.

As the next matte is called, and the fight pauses, I search the crowd. I know exactly where he is. I located him before I went on the mat, just like I’ve been doing since I was ten years old.

I scan and there, in the first row of the spectators, stood up, leaning slightly over the barrier he is. There is Don.

Don has rarely missed a contest of mine over the years. I’m not sure how he physically managed to achieve this, juggling a squad of over forty competitors, over multiple mats areas.

But, without fail, ten seconds before I was due to fight he would materialise. He would nod at me, and inside I was calm and strong.

He was there at my very first contest when I was 8 years old.

Years later he drove out to Wroclaw in Poland to coach me at my first junior Europeans. My mum did the map reading, while he bumped his new Alfa Romeo, over the cobblestones of East Germany to be there.

Five years later, he drove from Berkshire to Barcelona, to be at my first Olympic Games. And now, he has flown out to Hamilton, on the east coast of Canada.

A code, coach and competitor connected

He sees me look over. He taps the sides of his head with his fingers. Think, it means. Think what you are doing. Keep your cool.

By now, we had developed a code of signals that cut through the noise of any sporting arena. Coach and competitor connected, through this invisible communication chord. Everything else, the screaming crowd, the screech of the PA system, the voices fade to a background hum.

We would tune into our wavelength. A turn of the hand with fingers outstretched meant Sumi-gaeshi, a flick of the head meant Seoi-nage. More often than not, those gestures would be accompanied with a second instruction and additional information.

Raised eyebrows and an outstretched hand meant I think it will go, but you must judge it and only go for it if you think it’s on.

A clenched fist punched into his other hand (often accompanied by verbal bellowing) would mean, as you can probably deduce, things were not going well at all, and to get stuck in.

Believe you can do it

Right now, Don is telling me with his finger tap to his temples: think it out, be clever.

More importantly he is implying I know how to win this match. Don could have been jumping up and down. He could have been clasping his head or banging his fists into the barrier. But he wasn’t. Instead he was intensely calm.

He thinks I can do it. His calmness calms, his belief has reinforced my belief.

He has lightened the anxiety that is clogging my brain. Think it out, be clever. Instead of thinking about winning or losing, my focus pinpoints on something that is within my control.

What do I need to do?

Instead of being on some imaginary medal rostrum, I am back on the mat.

As my brain chugs back into life, and the referee calls Hajime, I know exactly what I need to do to win the world title.

This is an excerpt taken from “Moderately Satisfied Our Sensei: Don Werner”, written by Karen Roberts and world champion Nicola Fairbrother. 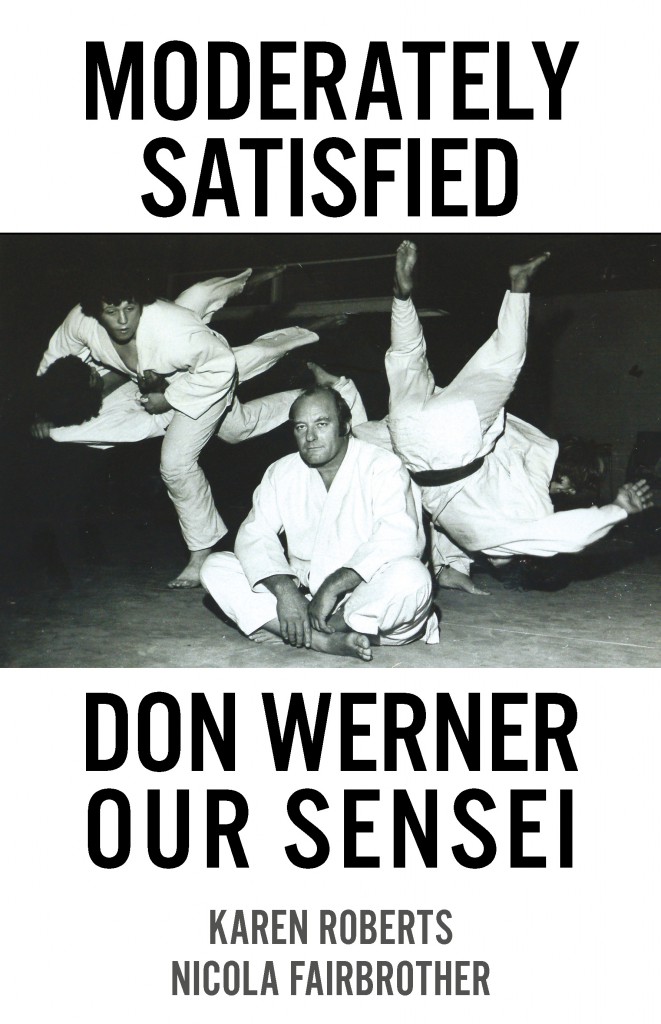 It’s Don’s drills, training methods and philosophy that form the core of Koka Kids from the judo books to the coaching resources.

Watch Video: About Koka Kids
Find out more about Koka Kids Judo Books
Look Inside: 40 Judo Throws
A sneak preview of what's inside the book
What’s Inside: 20 Turnovers
Take a sneak peak at the contents of this book
Free Interactive Book: Learn Judo Words