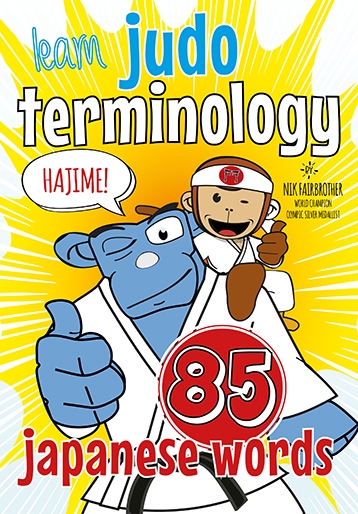 “85 Japanese Judo Words” is available free of charge as an ebook at the Koka Kids website or as a paperback on Amazon.

Who would enjoy this book?Although aimed at children who are learning judo, this book would be useful to anyone looking to for a fun language challenge during lockdown. Learning a second language is one of the best ways to improve memory and cognitive skills.

About the author
Nik Fairbrother is an Olympic silver medallist (1992) and world judo champion (1993), who was awarded an MBE by HRM The Queen, a holds the 7th Dan judo grade. She started judo at 8 years old, learning from Sensei Don Werner, at the Pinewood Judo Club, in Berkshire, England.

At the 1992 Barcelona Olympic Games, Nik won Great Britain’s first ever Olympic judo silver medal for women. Fairbrother has since commentated for the BBC at 3 Olympic Games, trained as a professional chef, and launched Koka Kids, a company devoted to keeping children active and looking at ways to get kids to read more.


About the book: “85 Japanese Judo Words”

“85 Japanese Judo Words” covers all the Japanese you will need to know from white to black belt. The challenge is: can you learn all 85 Japanese words and their English meaning before lock down finishes?” says Nik Fairbrother.

Broken down into sections, with fun illustrations and vocabulary charts, 85 Japanese Judo Words makes learning the foreign words visual and easy to learn.

How do we keep kids engaged in sport during lockdown? Fairbrother believes there is still a lot we can do that can turn this negative situation into a positive.

“The trick is to focus on what we can do and not on what we can’t. During lock down, we might not be able to get to the dojo or to the gym, but we can still give our brains a work out by reading and learning. This in turn keeps children engaged and enthusiastic about their passions, and ready to return to the activity as soon as are allowed.”


Why do judoka speak Japanese?

Judo was invented in Japan by Jigoro Kano in 1882. Today many judo commands and the judo techniques remain in the original language.

“You won’t hear your judo coach say, “begin practicing now!” or telling you to “stop throwing!” instead you will hear “Hajime!” and “Matte!” says Fairbrother.

“By learning these Japanese judo words, you will be able to understand what’s going on at your judo class and understand the names of judo throws.”

Everyone should attempt to learn a second language. Your brain will thank you if you do. Mastering a second language actually makes you smarter, by increasing the volume and density of grey matter.

Children and adults who learn another language will find they improve memory skills, are more creative, are able to solve problems, and focus for longer periods of time on one task.

Most of us know some Japanese already. Words like dojo and sensei, or emoji and sushi, tsunami and karaoke are now common place.

But can you tell your mune from your hiza? Do you know what part of your body your ude is? Do you stand on your ashi or your kata?

Can you scream a loud Kiai to gather your Fudoshin, while making sure, all the time you do so with much Reiho!?


There are lots more fun words to learn, like these in the children’s book “85 Japanese Judo Words.”

85 Japanese Judo Words is available on Amazon to buy as a paperback.

Nik Fairbrother, the 1992 Olympic silver medallist and judo world champion, is the author of a series of popular children’s books that are helping to keep kids engaged and active with sports during lockdown.